By Jane Powell, member of the Working Group and freelance writer based near Aberystwyth

The National Assembly for Wales is inviting ideas for ‘rethinking food in Wales’, with a new consultation that is open until mid-September. The Climate Change, Environment and Rural Affairs Committee wants to know what our vision is for the future of food in Wales and what needs to be done to achieve it, and they suggest a few things that we might want to see: healthy, locally produced food, a strong food industry that provides decent jobs, high environmental and animal welfare standards and an international destination for food lovers. 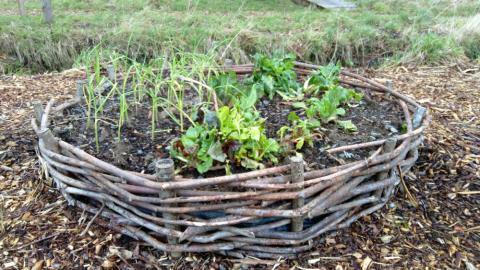 This is an invitation that Paramaethu, the Permaculture movement in Wales, cannot refuse. We are all about using the fundamental principles of good design, valuing small and slow solutions over the quick fix, and really getting to know the systems with which we are working before we intervene. As it happens, a separate but overlapping group has been looking at food in Wales for a while now, working on a Food Manifesto for Wales that is based on values and cooperation. This new consultation allows us to build on that and bring it to a wider audience.

Rethinking food is a huge challenge. If we were starting from scratch, we might look at what food we can grow or forage here, what would make a healthy diet for people, and how much we want to be reliant on homegrown food. We’d need to look at our food processing and distribution infrastructure. We would also want to design our communities so that everyone has a place at the table, and our education system so that people really understand how a nation feeds itself and have the necessary skills.

Of course, we are not working from a blank page. What we need now is a retrofit which will respond to the crises of obesity, soil erosion, biodiversity loss, food poverty and social disconnection, all of which are strongly shaped by the global food system and beset by the uncertainties of climate change. It feels like a tight space in which to manoeuvre, and time is short. Where is the best place to start, and how could Paramaethu rise to the challenge?

Many people see permaculture simply as a novel way of managing the land with perennial crops and polycultures, so that ‘doing permaculture’ means planting a forest garden and laying a lot of mulch. As such, it has tended to be the preserve of smallholders, often city-dwellers who have moved to the countryside for a fresh start. It has also been taken up by community gardens where urbanites have experimented with food production, often creating very beautiful spaces in the process.

There is certainly a role for these inspiring experiments in land use, which include trialling novel crops for food, fuel and fibre and experimenting with new relationships between producer and customer. Paramaethu Cymru is building a network of sites in Wales, supported by events and teaching materials, which will allow more people, including marginalized groups, to visit and learn more. But the scope of permaculture design is much wider than this, taking in economic and social structures and upholding ethics of care for land and people.

For one thing, we can learn a lot from indigenous models of land use. At the 2012 Eisteddfod, Carol Nixon, Marit Parker and I took a model of a Welsh mountain and talked to visitors about farming and the natural environment. We were moved by the way that so many of the older people responded with memories of working the land, and how close to their hearts it was. It was easy to draw parallels with the ethics and principles of permaculture: knowing and understanding the land and the weather, really inhabiting your ‘milltir sgwar’ or square mile, devising local solutions, using renewable resources and so on. Chris Dixon, working with his neighbours in rural Gwynedd, has documented some of this, including community patterning, and a traditional agroforestry practice known as ffridd.

Delving back further into history there was in rural areas a system of food production which was as low-carbon as we would like our future farming systems to be. Mixed farming, including hardy breeds of livestock and traditional crops such as black oats, the transhumance system of ‘hafod a hendre’, water-powered milling, horse power, the informal exchange of labour and community solidarity – some of these may have had their day, but the underlying principles are ripe for rediscovery.

Welsh history abounds too with inspiring examples of social change. Take the eighteenth century ‘circulating schools’ which rotated around rural parishes, mainly in the winter months, and were estimated to have taught over 300,000 people to read within the space of 40 years, transforming Wales into a literate nation. There might be some lessons there about how to spread ecological awareness. Then there is the non-violent resistance of the twentieth-century language movement, which rallied the nation around a cultural legacy that was being pushed to the margins. And in the present day we have One Planet Developments such as Lammas in Pembrokeshire, which are pioneering new models of low-impact living, and the Well-being of Future Generations Act.

All these examples provide the permaculture designer with inspiration and ideas. Change is indeed possible! Redesigning our food system is a task that will continue forever, but there is a special opportunity to consider it now as the stimulus of Brexit is shaking up so much received thinking. Permaculture designers are well placed to suggest radical solutions, so let’s see if we can offer something new. Let’s integrate policy areas, use renewable resources, value the marginal, accept feedback and above all think deeply and stay open to creative responses. Remember, the problem is the solution.

You can read the final submission from Paramaethu Cymru on the Assembly website, item 10 on this page