Tombreck – pigs, farm co-op and thinking about the future 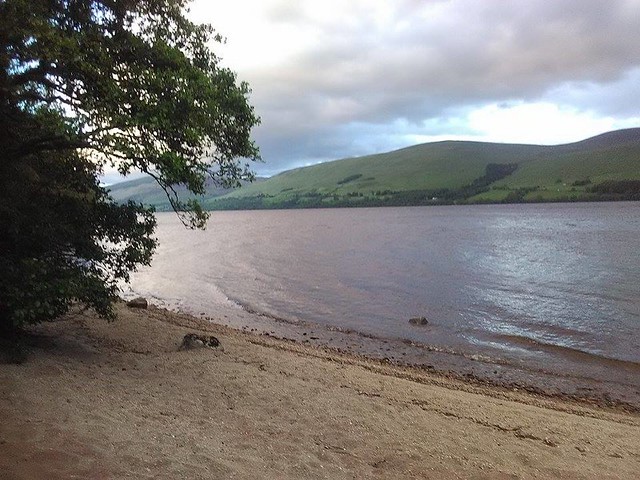 After three weeks in Glasgow under the rain, I headed towards Tombreck, my very last stop before the Scottish Permaculture Gathering (the end of my journey)!

As you may remember, my last article on the Concrete Garden, an urban permaculture project, argued for a stronger standpoint on the subject of land and public space.

Going to Tombreck was therefore in the continuity of my thought process and a very good way to end the on the ground part of my research project. Indeed, on this 240 acres farm, sustainability through land, assets and liabilities division is now at the centre of the project.

Tober and Sue, the current owners of the farm, are looking at ways for it to work as  a cooperative, owned by the people that live there, the future new farmers, and people interested in buying shares and having a say in the developments of the farm. 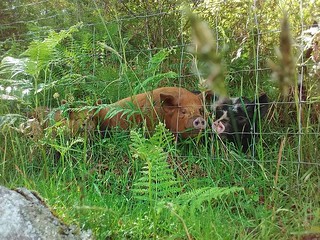 Situated on a hill on the bank of Loch Tay, the old family farm has seen many transformations since 1997, when Tober inherited it. It now has families and couples living there in beautiful ecological houses designed by Sue. Also, a centre for activities - The Big Shed - where you can take yoga classes and organise parties, a beautiful little bothy for volunteers, and a farm shop where they sell pork (like the sausages and burgers I helped prepare while I was there!), delicious eggs and jams.

It is a truly multi-functional space, with one issue at its core: how to make the farm work sustainably now and in the future.

One word about the farm itself - it is, at the moment, Tober’s business. He keeps pigs, who live in acres of wonderful woodland next to the Loch. Twice a day, Tober walks up and down the hill to feed them. There are also hens and ducks who provide the family, as well as friends and customers with incredible eggs.

A double challenge to tackle: the time and the space dimension

When we think of permaculture, we often think of small spaces: a back garden, a couple of acres of land, a tiny breach of greens and leaves in the city. Not 240 acres. Being in charge of so much land is a challenge in itself if you intend to use it in a sustainable and ecological way, and follow permaculture principles as much as possible. Moreover, none of Sue’s and Tober’s children are able to take over the farm, and as the couple are now in their sixties, thinking about what is going to happen to the farm in 20 years, or when they decide to pass it over, is a real issue.

There is therefore a double issue when looking at land through these prisms, with permaculture in mind: first of all, the ‘spatial’ dimension, in relationship to the fair share ethic. How can 240 acres of land be profitable to the maximum of people? How can we use it to maximise the benefits – ecological, economic, social?

But there is also a time dimension that is equally crucial. Sustainability is only possible if we can secure next generations’ future as well, by making sure that the land transformed ecologically won’t be turned into a golf lawn in ten years’ time.

It involves finding a balance between short-term necessities and the crucial long-term questioning: what legacy do we want to leave through our projects? 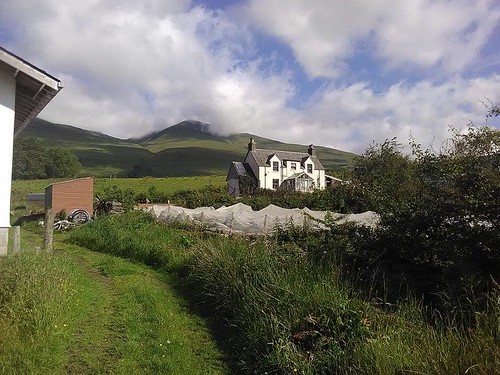 For Tober, the idea of turning the farm in a cooperative and therefore passing it over was both a political statement reflecting his views on society, as well as the best way, according to him, for the farm to function.

For Sue, it was the solution to a problem (inheritance), that she had investigated in the last years, by visiting such projects as Fordhall Farm and the LILAC project in Leeds.

Turning the farm into a cooperative could potentially solve the financial and temporal problems faced by the farm. Moreover, they hope to involve more young farmers into their project.

They got a grant to plant 40 000 trees, which are going to be planted according to agroforestry principles as hedges to separate the property into several small fields, that could then be used for different projects – market gardens, dairy cattle… - to make the farm as vibrant and productive as possible.

They are currently organised into the Tombreck Action Group (TAG), constituted by ‘friends of Tombreck’ in 2003, with this mission statement ‘for Tombreck to work as a farm, and to diversify into other activities so as to include other people, and to provide housing and employment at a sustainable level". The cooperative would only take that a step further and help prepare the future even better.

Cooperatives and community-owned farms are also mentioned in the recent A People’s Food Policy manifesto (to which the Permaculture Association contributed) as part of the solution to our food crisis – read it, it’s fabulous. 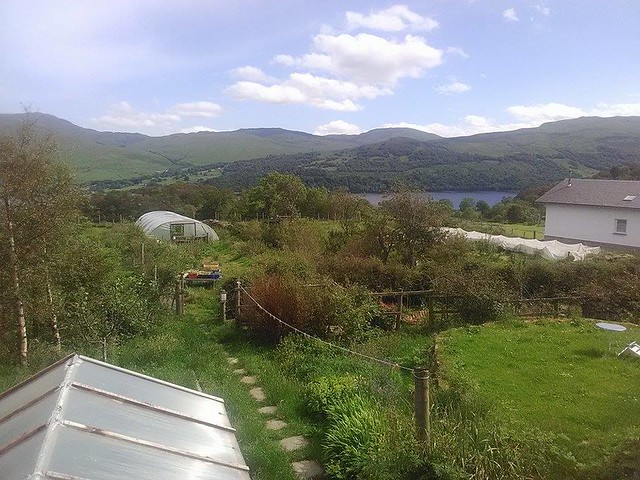 The question of land is crucial to answer nowadays ecological and social issues. Indeed, who owns it is usually a good indicator of the state of our societies, and has a deep impact on what is done on it. Once again, the physical and temporal factors are intrinsically linked.

When people own the land, as is the case in community owned land that are being developed in the North West of Scotland, they feel a stronger connection to it and are therefore more keen on protecting it and securing it for future generations.

Today, it is 500,000 acres in Scotland that are controlled and owned by the local population. They build forest gardens, schools, housings, they plant trees and in some cases as in Eigg, take control of their local energy needs. People are coming back to islands that were severely depopulated; investments and innovations are thriving. This is what happens when people have control over where they live.

Indeed, the Highland Clearances dramatically transformed ownership patterns on a very physical and spatial level, but also on a psychological one: the new profit-based Victorian values that led the way to the clearances strongly challenged the way Highlanders thought about land and their relationship to it by seeking to destroy the connection between people and where they lived.

Episodes like Standing Rock last year remind us that this is not over. The fight to have control over land is a constant one, which often involves a clash of ideology in places that have been colonised by European powers. What we’ve came to think as ‘natural’ in terms of land ownership patterns throughout the world, based on profit and exploitation of resources, is a recent concept forcedly exported and implemented by major European empires in their colonies.

The Highland Clearances: a warning and a message of hope 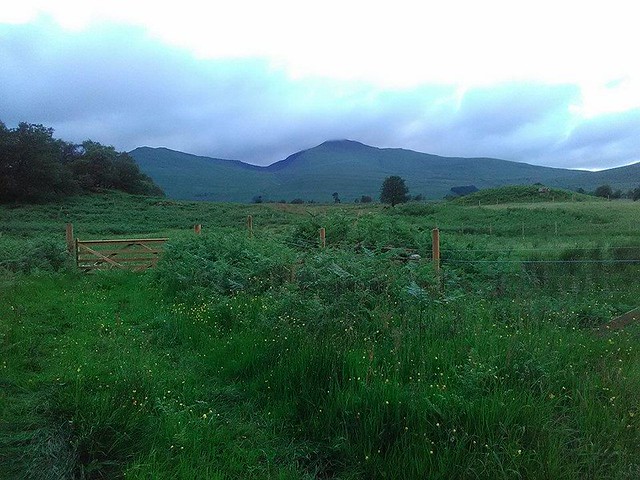 In the light of today’s ecological and social crisis, the Highland Clearances can therefore be interpreted both as a warning and a message of hope.

It shows us what happens when finance and profit are chosen over people, and the disastrous ecological and social consequences it has. It also shows us that many ecological catastrophes come from relationship of powers, hierarchies and a sense of privilege (the ‘superior’ Saxons colonising the ‘idle’ Gaels – a common trope in many newspapers of the time), as is argued by Murray Bookchin.

Focusing on purely technological advances will have little impact on the bigger scheme of things if inequalities are not tackled.

Finally, because every cloud has a silver lining, the Highlanders managed to resist during the Highland Land Wars, and (re)gain control of some of their lost lands and a sense of community consciousness.

And today, the Highlands and islands are showing us the way with Community Land Ownership being overwhelmingly and successfully developed there more than anywhere else. Taking care of the people, taking care of the Earth and the land we live on, and distributing it fairly: could it be more ‘permaculturey’?

This was my last article! I hope I have made you think and question your position and privileges. I hope you enjoyed reading my blog articles as much as I enjoyed writing them, and I hope you disagreed with me sometimes – especially if you have good arguments that, in turn, will make me think. This is how we learn and this is how we progress.

Finally, I would like to thank all the lovely people I met along my way: Graham and Nancy from the Garden Cottage, Lorraine, Uula and their children from the Hidden Mill, Clive and Julie from the Black Isle Permaculture Centre, James and his family from Tap O Noth, Paula, Kate and Clare from the Concrete Garden, Sue and Tober from Tombreck. Thanks to Chris Warburton Brown, Beth Ramsay, Lusi and Danny, and all the wonderful WWOOFers and friends I made in beautiful Scotland. I will be back!